The 30th of January every year is observed as the National Cleanliness Day in India since 2014 to commemorate the death anniversary of Mahatma Gandhi. While waste is a mounting problem in India, the responsibility for environmental cleanliness is of utmost importance in both private and public spaces. Sadly, in most parts of India, cleanliness is a concept that is still restricted within the four walls of our homes and there is little concern and sense of ownership for cleanliness when it comes to public spaces. 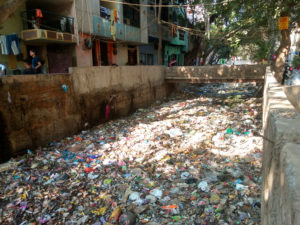 The 52 Cusec Drain and the roads alongside in Shahdara area of Delhi is a victim of this problem and despite numerous attempts by the Government and local citizens continue to be a ground for waste disposal and an appalling sight for all. Needless to mention, the many problems like bad odor, diseases and breeding mosquitoes have become the order of the day. In an effort to raise awareness about the importance of cleanliness in general and shed our apathy and take responsibility for cleaning the Babarpur Drain, a community mural was planned on the occasion of National Cleanliness Day. Murals are an effective tool to add aesthetic vibrancy and energize neglected areas. They enhance the neighborhood by creating a sense of ownership and also highlight community efforts and resilience initiatives.

The Su-Dhara Team co-developed the theme for the mural with the community members over a period of one month. The tagline of the mural established the direct relationship between community health and the dumping of waste in the Drain. While the Drain remains to be the most unclean element within the community space, the mural’s messaging will transform the outlooks of people about their attitude towards throwing waste into the drain. This is the first mural under the Su-Dhara Project and is a collective thought space that will initiate dialogue around the common community issue of waste. The characters depicted were involved in day-to-day actions and resonates well with the community. It shows a man disposing his household waste into the Drain and a local woman is forbidding him to do so. This female character is symbolic of the voices and concerns of the community. She is depicted as a strong character and a representation of the whole female population in the area who can become the true custodians of cleanliness. The other person on her right is an aged man who is wondering whether to throw waste into the Drain. He seems a little hesitant and unsure about his actions and represents our conscious self that forbids us from littering waste which one often ignores! 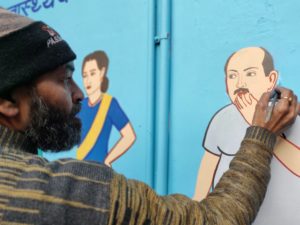 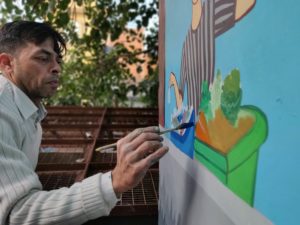 The Shri Ganesh Temple on which the mural has been painted is adjacent to the Drain thus taking centrestage to draw maximum attention. The Temple Committee was deeply involved in the conceptualization process of the mural and extremely cooperative to allow for the painting. Other local community members from the nearby area were also invested in the process with their ideas and constructive criticisms through the iterative visualization process of the mural concept. A local painter from Babarpur was involved to create the painting who also had a deep understanding of the community at large. The mural transformed the nearby area and the community’s inputs in the painting process makes the people take ownership of the mural and its maintenance. 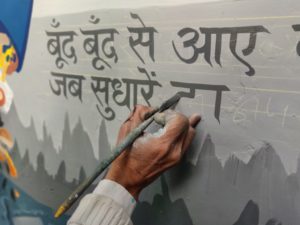 The thematic conceptualization of the mural was done with an aim to not just beautify the space but to put across a strong message of community cleanliness. Relatable figures, direct messaging and depiction of the problem served a utilitarian purpose. The community mural transformed the space and celebrates the community’s aspirations and outlook towards waste management and how each individual can come together and make their own contributions towards keeping the Babarpur Drain and public spaces clean. This is one of the few ways through which we can begin to change our society and the way it views cleanliness! Come by to take a look at the first community mural under the Su-Dhara Project at Shri Ganesh Temple Balbir Nagar in Babarpur! 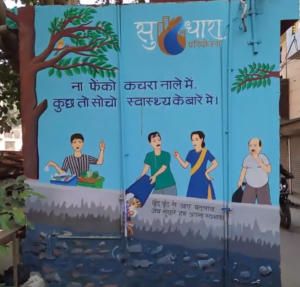