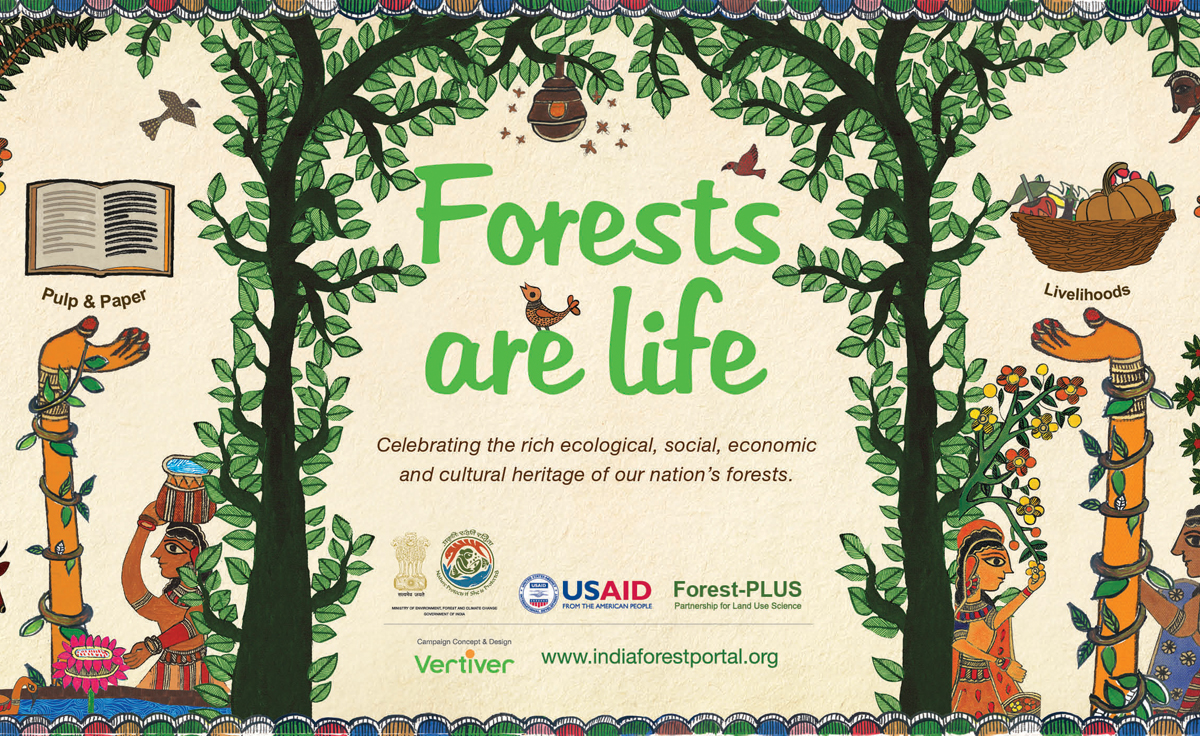 The “Forests are Life” campaign was conceptualized and designed by Vertiver and was launched 2nd year in a row on March 21st 2016, in partnership with MoEFCC and USAID to mark the International Day of Forests. The campaign which is displayed across 300 sites in Delhi, Mumbai and Bangalore, sheds light upon the wide range of ecosystem services that our forests provide us. This was graphically translated using the folk illustration style of Madhubani art. The ‘hands’ rising from the earth symbolize the rich gifts offered by forests such as timber, medicine, water, oxygen and carbon sequestration. This theme extends Vertiver’s 2015 Forests are Life campaign which celebrated forests as Biodiversity, Water, Oxygen, Carbon Sinks, Culture, Food, Medicine and Livelihoods.

As part of our digital campaign, we created a facebook filter that people could use to show their support for the cause. The response towards this was phenomenal! Over 13,000 people liked the campaign, and over 260 changed their profile pictures.

We are proud to have also created a public service message from the PMO on Forestry Day as part of the campaign. In this Ad we celebrate the freshwater-based ecological services of forests. This Ad ran acorss major newspapers across the country in Hindi and in English.

There is a saying: “What we are doing to the forests of the world is but a mirror reflection of what we are doing to ourselves and to one another.” This beautifully summarizes the theme of the round-table conference that at the Ministry of Environment, Forests and Climate Change (MoEFCC) and USAID, on the topic: Corporate Forest Responsibility. At this event, the honourable Secretary of MoEFCC, Shri Ashok Lavasa unveiled the campaign. He later tweeted about it here:

This day also saw the launch of our very own Delhi Landmark Tree Map, which we researched, designed and printed.

As we continue our commitment to Forestry through design approaches, we look forward to launching a new mobile app on India’s forests and are now in the process of building the India Forest Portal as a key dissemination vehicle